Thanks! Your bid number is 0
Lindblad National Geographic |

Just Like Darwin’s Beagle, the 96-guest National Geographic Endeavour will lead you to the doorstep of adventure.

Follow in the footsteps of Charles Darwin and discover one of the most secluded ecosystems on the planet when you journey to the Galápagos Islands for an equatorial adventure unlike any other. In this 10-day expedition to the famed archipelago, you will join the Lindblad-National Geographic team aboard the National Geographic Endeavour ; their classic 96-guest expedition ship uniquely equipped for experiencing the island’s one-of-a-kind wonders. After arriving in Guayaquil, Ecuador’s cultural and economic center, you’ll venture 500 miles to the west, in the heart of the Pacific Ocean, where you will encounter the Galápagos themselves. Board the National Geographic Endeavour and set sail for one of the last truly wild refuges on Earth led by the most knowledgeable expedition team in the Galápagos.

Over the course of the next week you will see and visit a handful of the 18 major islands that make up the Galápagos, encountering a spectacular abundance of flora and fauna along the way. Touch down on Bartolomé, where lava, mangroves, and golden sand converge. Visit the Charles Darwin Research Center on Santa Cruz and learn about the science of saving the endangered Galápagos giant tortoise. Explore Fernandina, the Galápagos’ youngest island and one of the most pristine tropical islands left on the planet. See prehistoric marine iguanas and giant tortoises, cormorants and blue-footed boobies, and witness for yourself why the Galápagos Islands have maintained such a hold over the world’s imagination. 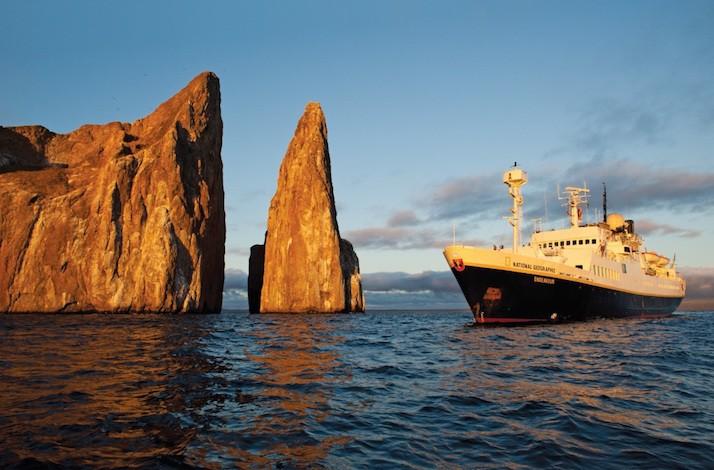