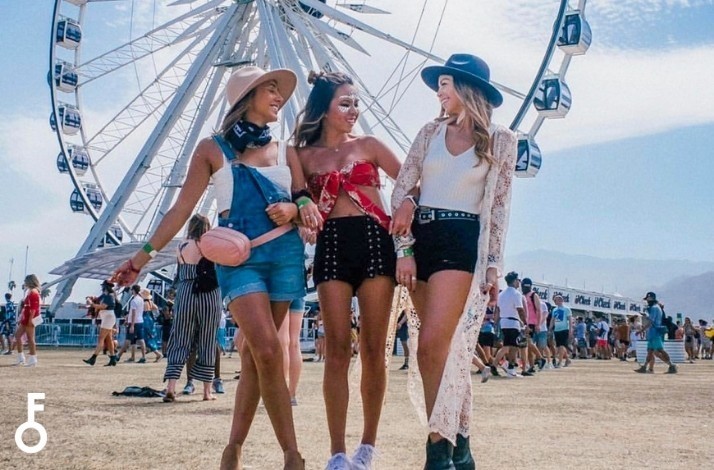 Only at a music festival can you experience so much eclectic music all in one place. Festivals are the perfect event to inspire travel offering experiences far beyond music with their different locations, themes, and cultures. From great scenery, notorious lineups, and quirky auxiliary experiences, here’s a list of festivals that should make any bucket list.

Outside Lands is great because it’s easy to reach—on the outskirts of a major city with a big airport and plenty of accommodations. Situated in Golden Gate Park, you can take in the musical sounds at Outside lands, billed as “a celebration of everything we love about the Bay Area.” It’s a party for all five senses, combining an eclectic lineup with world class art, food, wine and more. As it evolves with groundbreaking experiences like Grass Lands and mind-expanding talks at D.A.V.E, Outside Lands continues to shine as a festival that’s totally original and 100% San Francisco.

One of the largest Hip Hop and R&B festivals in the Country, The Essence Festival held annually in New Orleans is the largest event celebrating African-American culture and music in the United States.  The event celebrates so much more than music, with a conference of speakers, unique vendors, and classic food.

Ultra is the world’s premier electronic music festival, boasting elite DGs and unparalleled production located in the gorgeous city of Miami. Ultra takes place over 3 days in the month of March. More than 160,000 electronic music enthusiasts come together for what was voted the world’s #1 festival by DJ Mag for three years running. The flagship Miami waterfront festival is the US site in the series of Ultra festivals that happen globally every year.

Firefly is a massive festival with more than a hundred acts on eight stages. As the largest open-air festival in the Northeast, it boasts nearly 90,000 attendees. The performers run the pop artist gamut and the festival has its own culture with camping opportunities and cool merchandise.

This star-studded festival takes place annually in Indio, California and is the icon of American summer festivals. With its great location, sunny skies, palm trees, celebrity crowd, and Instagram moments, this is the festival that defined festival life and style for the rest. Coachella is so big, the festival is split over two weekends, so there are two chances to get tickets to this event that sells out in minutes.

6. Budweiser Made in America Festival, Philadelphia

Made In America is an annual, two-day music & arts festival held at the Benjamin Franklin Parkway in Philadelphia, Pennsylvania during Labor Day Weekend. With dozens of top performers and multiple stages on the Benjamin Franklin Parkway, the two-day music festival curated by Jay-Z is one of the year’s can’t-miss events. Every year, Jay-Z hand-picks a lineup of both established and up-and-coming musicians to perform throughout the weekend. In addition to music, guests can look forward to amusement rides, interactive activities and plenty of food and drink, including a variety of appetizing food choices — including traditional festival fare and gourmet food trucks — as well as free filtered water service onsite at many stations throughout the festival.

Bringing together jazz, rock, electronic, hip-hop, punk and just about any other genre and sub-genre you want to celebrate, pitchfork is the place to be if you have eclectic taste or if you’re an indie-music enthusiast. More than 40 bands take the stage over 3 days in Chicago, and it’s a music-lovers paradise with its record fair and incredible food from local and national vendors.

Hangout Music Fest bills itself as a Music vacation, and it’s one of only a few festivals that take place right on the beach. There’s no camping at Hangout, so for those who don’t care for the roughing-it life of festival glamping, this is a great starting place. The event features many genres of music, including rock, indie, hip hop, and electronic dance music. Hangout Music Fest is produced by the people who produce Coachella and it generally takes place the third weekend in May.

The word Bonnaroo is actually Creole slang for “the good stuff”. Bonnaroo features a diverse lineup of 150+ musicians and other performance artists every year. With 10+ stages and entertainment that goes all night long, you will never be bored. There is also an opportunity to camp onsite, and numerous interactive art installations to explore. Bonnaroo also has festival life down to a science with its “Plazas”, which offer not only fun activities, but water, charging stations, medical, free public wifi, and showers.

Lightning in a Bottle, held at Buena Vista Lake in the Central Valley California, is the premier festival for independent music, learning, and culture. It offers a new kind of festival—a transformational festival—that’s centered around psychedelic art, electronic dance music, community building, workshops, and yoga. Over the past fifteen years, Lightning in a Bottle has crafted its musical journey by bringing superstar talent and rising acts alike into the event’s singular communal experience. This festival is on the smaller side, with only 20,000 people in attendance, offering speakers and demonstrations as well as music.

Excited for your own taste of the summer music scene? Check out these once-in-a-lifetime music experiences.